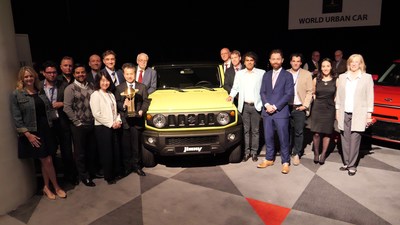 Toshihiro Suzuki, Representative Director and President of Suzuki Motor Corporation said, "We at Suzuki are greatly honoured to receive this award. The Jimny is the one-and-only, compact, authentic off-roader, and we have kept true to this concept for almost 50 years. It now has many fans around the world, who enjoy its excellent performance and one-of-a-kind functional design, both on and off-road. We accept this award on behalf of our fans, as well as with pride and confidence in our passion to build exciting cars to be the foot of our customers everyday lives."

The 2019 World Urban Car winner was chosen from an initial entry list of five cars from all over the world, then a short list of three finalists as announced in Geneva on March 5th. The 2019 Top Three in the World finalists are: the Hyundai AH2/Santro, the Kia Soul and the Suzuki Jimny.

The World Urban Car award was introduced in 2017 because it's an award whose time has come. World Car Awards Program co-chair, Mike Rutherford, commented, "Everyday cars in many - perhaps most - parts of the world will have to become smaller if road and parking space is to be found for them in increasingly packed towns and cities whose populations are swelling annually."

Vehicles were selected and voted on by an international jury panel comprised of 86 prominent automotive journalists from 24 countries around the world. Each juror was appointed by the World Car Steering Committee on the basis of his or her expertise, experience, credibility, and influence. The international accounting firm KPMG tabulates the jurors' ballots.

World Car also made a stop at the Consumer Electronics Show (CES) in Las Vegas on January 10, 2019 where together World Car and ZF hosted a panel discussion moderated by Tim Stevens (Editor-in-Chief, CNET'S Roadshow and World Car director). The topic for discussion? "The Intersection of Consumer and Automotive Tech."

Of course, The Road To the World Car Awards doesn't really stop. Just a few weeks from now the World Car Garage will be staged for the fourth year at the London Motor & Tech Show May 16-19; offering a glimpse of the 2020 contenders as well as celebrating the 2019 winners.

PHOTOS and VIDEOS: event photos will be posted the morning of Wednesday, April 17th to www.worldcarawards.com. Photos of the top three car finalists in all categories are already on the web site's home page.  Videos from the event will be posted by Wednesday afternoon.

New York International Auto Show
Owned and operated by the Greater New York Automobile Dealers Association, the New York Auto Show is an awesome combination of new ideas, technological innovation, exceptional concept cars and nearly 1,000 of the latest new cars and trucks. Over one million visitors are expected to visit the show this year to see what is truly possible from the automotive industry.