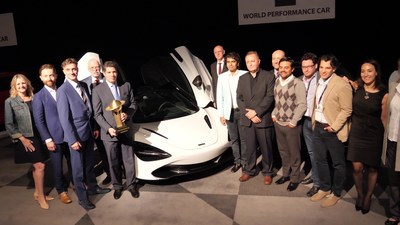 "We feel grateful anytime one of our cars wins an award, but to have the 720S named World Performance Car is particularly special," said Mike Flewitt, Chief Executive Officer, McLaren Automotive. "We believe the 720S is a revolutionary step forward for both McLaren, as well as the supercar segment, and to have it recognized in this way by an organization made up of the most esteemed media across the globe is a great honour."

The McLaren 720S was chosen from an initial entry list of six cars from all over the world then a short list of three finalists as announced in Geneva on March 5th.  The 2019 Top Three in the World finalists are the Aston Martin Vantage, the McLaren 720S and the Mercedes-Benz AMG 4-door Coupe.

Candidates eligible for World Performance Car must be produced in volumes of at least 2,000 units/year, must be overtly performance focused in nature, and must be available for sale on at least two continents during the period beginning January 1, 2018 and ending May 31, 2019.

World Car also made a stop at the Consumer Electronics Show (CES) in Las Vegas on January 10, 2019 where together World Car and ZF hosted a panel discussion moderated by Tim Stevens (Editor-in-Chief, CNET'S Roadshow and World Car director).

PHOTOS and VIDEOS:  event photos will be posted the morning of Wednesday, April 17th to www.worldcarawards.com. Photos of the top three car finalists in all categories are already on the web site's home page.  Videos from the event will be posted by Wednesday afternoon.