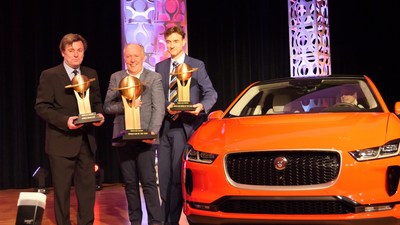 Prof. Dr. Ralf Speth, Chief Executive Officer, Jaguar Land Rover, said: "It is an honour that the Jaguar I-PACE has received such an accolade from the prestigious World Car jurors.

"For I-PACE to be awarded 2019 World Green Car gives our first all-electric vehicle the ultimate recognition it deserves. I would like to thank the team who have created I-PACE for their passion in making it so outstanding.

"Designed and developed in the UK, the zero-emissions I-PACE is attracting customers worldwide, and for many it will be their first EV and their first Jaguar – to date, over 11,000 people in more than 60 countries have taken delivery. The balance of sports car performance, exceptional refinement and true SUV practicality make I-PACE the stand-out choice in its segment."

Jaguar Director of Design, Ian Callum, was in New York to accept the awards.

"As intuitive and as rewarding to drive as all other Jaguar models, the I-PACE uses state-of-the-art technologies to help customers get the most from every journey. The thermal management system has a smart heat pump which can scavenge energy from the outside air and the vehicle's high-voltage electronics to heat the cabin: this reduces the load of the battery, which in turn increase ranges – even in freezing conditions.

"The range display is personalised to each individual driver and can show how much energy systems such as climate control or heated seats are using – and how much range could be gained by switching them off. And if the vehicle is fitted with four-zone climate control, the Smart Climate function ensures that it will only heat or cool the area around each occupant, ensuring comfort with minimum energy consumption."

The JAGUAR I-PACE was chosen from an initial entry list of eleven new vehicles from all over the world, then a short list of three finalists as announced in Geneva on March 5th.  The 2019 Top Three in the World finalists are the Audi e-Tron, the Hyundai Nexo and the Jaguar I-PACE.

To be eligible for the 2019 World Green Car award, a vehicle had to employ some significant form of advanced technology specifically to enhance its environmental responsibility, be produced in volumes of at least 1,000 units/year, and be on-sale on at least one continent prior to May 31, 2019.

PHOTOS and VIDEOS:  event photos will be posted the morning of Wednesday, April 17th to www.worldcarawards.com. Photos of the top three car finalists in all categories are already on the web site's home page.  Videos from the event will be posted by Wednesday afternoon.