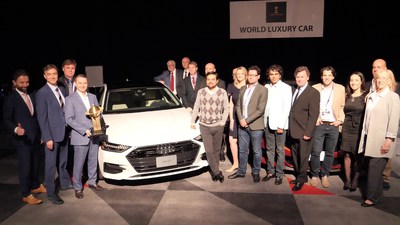 NEW YORK, April 17, 2019 /PRNewswire/ -- The Road to the World Car Awards journey concluded today with a grande finale awards ceremony and press conference that opened the New York International Auto Show. The Audi A7 was declared the 2019 World Luxury Car.

This is the second consecutive World Luxury Car win for AUDI AG.  The A8 was last year's winner in this category.

"It is a great honor for Audi to win the 'World Luxury Car' award twice in a row," says Hans-Joachim Rothenpieler, Member of the Board of Management of AUDI AG Technical Development. "We are very proud of this award because it shows Audi's ability to develop leading premium cars in various segments."

This year's winner was chosen from an initial entry list of five prestigious cars from all over the world, then a short list of three finalists as announced in Geneva on March 5th.  The 2019 Top Three in the World finalists are the Audi A7, the Audi Q8 and the BMW 8 Series.