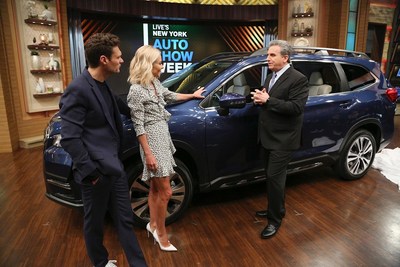 NEW YORK, April 4, 2018 /PRNewswire/ -- The New York International Auto Show is making its annual pit stop at top morning talk show "Live with Kelly and Ryan."  This week, a wide variety of top-of-the-line vehicles from the 2018 exhibition are featured on "Live" as "New York Auto Show Week" returns to the program.

Kicking off the week with sports cars, followed by crossovers and SUVs, and the hottest new green cars, "Live" will continue the week on Thursday, April 5 with a look at "rugged yet refined" vehicles, including the world debut of the Range Rover SV Coupe.  And the week will wrap up on Friday, April 6 with a spotlight on the most exciting new sedans, including the highly-anticipated 2019 Nissan Altima.

About Live with Kelly and Ryan
"Live with Kelly and Ryan" is distributed in national syndication by Disney | ABC Home Entertainment and TV Distribution. The show is produced by WABC-TV in New York and executive produced by Michael Gelman, Kelly Ripa and Ryan Seacrest. Visit "Live" on the web (KellyandRyan.com), Facebook and Instagram (@LiveKellyandRyan), and Twitter and SnapChat (@LiveKellyRyan).

About the New York Auto Show
The New York International Automobile Show is an awesome combination of new ideas, technological innovation, exceptional concept cars and nearly 1,000 of the latest new cars and trucks.  Over one million visitors are expected to visit the Show this year to see what is truly possible from the automotive industry.  The New York International Auto Show is owned and produced by the Greater New York Automobile Dealers Association and has an economic impact on New York City of some $300 million.