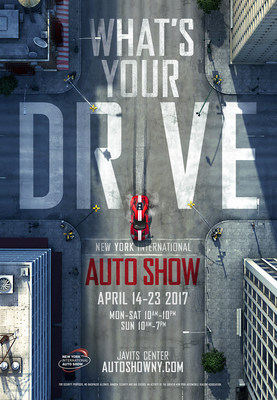 NEW YORK, April 7, 2017 /PRNewswire/ -- The New York International Auto Show is pleased to announce its launch of the 2017 poster artwork which helps set the tone for New York City's iconic 117-year-old automobile event, which runs from April 14 - 23 at the Jacob K. Javits Convention Center in Manhattan.

By asking 'What's Your Drive?' the 2017 Show poster is designed to start the conversation about what stirs emotions and powers up the imagination.

"After more than a century, excitement is still a driving force of what motivates people to buy and drive cars," said Show chairman John LaSorsa. "With all the talk of cars driving themselves, we wanted to have a little fun this year and remind people how exhilarating driving can be. And, although our poster art shows a high-performance red sports car, any of today's new cars and trucks offer the fun of driving and the freedom of mobility," remarked LaSorsa.

Nothing exemplifies individual freedom better than the automobile, and nothing represents New York City better than its storied streets. By combining them in a fun, imaginative way, this year's poster captures these two iconic symbols of urban chic with automotive excellence, creating an image that will resonate with Show visitors.

The poster art is the backbone of a comprehensive media campaign that will be featured on area billboards, television and print ads, Subway cars, plus a wide range of social and digital media applications.

The New York Auto Show is an incredible combination of new ideas, technological innovation, future-looking concept cars and nearly 1,000 of the latest new vehicles. Over one million visitors are expected to visit the show this year to see what is truly possible from the automotive industry.

About the New York Auto Show
The New York International Automobile Show is an awesome combination of new ideas, technological innovation, exceptional concept cars and nearly 1,000 of the latest new cars and trucks.  Over one million visitors are expected to visit the Show this year to see what is truly possible from the automotive industry.  The New York International Auto Show is owned and produced by the Greater New York Automobile Dealers Association and has an economic impact on New York City of some $300 million.